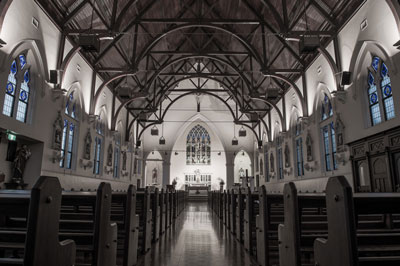 History of the Parish

In 1903 the Sisters of Mercy from West Perth opened a convent and school in Marian Street Leederville, which is now called Aranmore, after a well-known island off the coast of Ireland. By 1904 a weatherboard building was erected and Mass was held each Sunday. On the 1st of March 1919, the Leederville Parish was established with its own parish priest Father Moloney. He was born in Limerick, Ireland in 1882 and educated by the Christian Brothers at Charville, France and later studied philosophy at Mt Melleray. After arriving in Western Australia, he served as curate at St. Mary’s Cathedral, followed by periods as parish priest in Busselton, York, Victoria Park, Menzies and Wagin. He died in February 1958 after a long illness and his burial cross and surround now reside within the church grounds.

Following extensions, the completed Church of St Mary’s Leederville was blessed and opened by the most Rev. Patrick Joseph Clune, Fourth Bishop and First Archbishop of Perth on the 13th of February, 1938. The bell that rings faithfully every Sunday morning was cast at the O’Byrne Foundry in Dublin in 1928, probably ordered when the original plans for the church were first drawn up.